Special issue: Multi-disciplinary research and integrated monitoring at the... 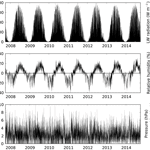 A 7-year dataset for driving and evaluating snow models at an Arctic site (Sodankylä, Finland)

Abstract. Datasets derived from measurements at Sodankylä, Finland, for driving and evaluating snow models are presented. This is the first time that such complete datasets have been made available for a site in the Arctic. The continuous October 2007–September 2014 driving data comprise all of the meteorological variables required as inputs for physically based snow models at hourly intervals: incoming solar and longwave radiation, snowfall and rainfall rates, air temperature, humidity, wind speed and atmospheric pressure. Two versions of the driving data are provided: one using radiation and wind speed measurements made above the height of the trees around the clearing where the evaluation data were measured and one with adjustments for the influence of the trees on conditions close to the ground. The available evaluation data include automatic and manual measurements of bulk snow depth and snow water equivalent, and profiles of snow temperature, snow density and soil temperature. A physically based snow model is driven and evaluated with the datasets to illustrate their utility. Shading by trees is found to extend the duration of both modelled and observed snow cover on the ground by several days a year.